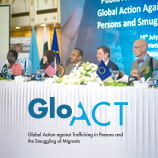 21 July 2017 - The Global Action to Prevent and Address Trafficking in Persons and the Smuggling of Migrants (GLO.ACT), a four-year joint initiative by the European Union (EU) and UNODC, was launched in Islamabad, Pakistan on Wednesday.

In addition to the project, a public awareness campaign on the topic was launched, co-funded by Australian Government Department of Immigration and Border Protection and the United States Department of State.

Speaking at the launch, César Guedes, UNODC Representative for Pakistan, said that the international community needs to join efforts to combat human trafficking and migrant smuggling in a comprehensive manner.  "There is a need to mobilize all the relevant stakeholders to transform institutions and put people at the center of public service," he continued, adding: "We need to mobilize creative initiatives like GLO.ACT and empower the institutions to be innovative in their approach, so that no one is left behind."

Also participating, Muhammad Shifaque, Additional Director General for the Federal Investigation Agency of Pakistan, said: "Notwithstanding the critical importance of all forms of public interventions for curtailing trafficking in persons and smuggling of migrants, it is crucial to have governments and civil society work in close partnership in the fight against these crimes."

David Hale, Ambassador of the United States, welcomed the launch of both initiatives, emphasized that success would require partnerships among governments, judiciaries, civil societies, business communities and the public.

Jean-François Cautain, Ambassador of the European Union to Pakistan, said that through better regional and international cooperation on law enforcement, investigation and prosecution, criminal networks can be interrupted.  Acknowledging GLO.ACT's efforts, he said that it combined prevention with protection strategies: strengthening capacities and providing assistance and protection for vulnerable victims.

Margaret Akullo, GLO.ACT Project Coordinator, said that, in addition to providing assistance to 13 participating countries, the initiative will also directly benefit civil society organizations as well as victims of trafficking and smuggled migrants.

"Together with our implementing partners, we apply six key responses to the project. These responses include strategy and policy development; legislative assistance; capacity building; regional and trans-regional cooperation; protection and assistance to victims of trafficking and smuggled migrants; and assistance and support to children among victims of trafficking and smuggled migrants," she emphasized.

Also participating in the meeting were GLO.ACT implementing partners, Junaid Khan, Senior Programme Coordinator at the International Organization for Migration (IOM); and Sarah Coleman, Chief of Child Protection at the United Nations Children's Fund (UNICEF), who delivered presentations on the strengths of their organizational mandates on assistance to vulnerable migrants and children protection, respectively.

A four-year joint initiative, GLO.ACT is funded by the European Union (EU) and UNODC, and implemented in partnership with IOM and UNICEF. The project reaffirms the importance of combating human trafficking and migrant smuggling for the EU and the UN. GLO.ACT is a coordinated response to trafficking in persons and the smuggling of migrants, and it aims to strengthen the criminal justice response in 13 strategically selected countries across Africa, Asia, Eastern Europe and Latin America.

Global Action to Prevent and Address Trafficking in Persons and the Smuggling of Migrants (GLO.ACT)