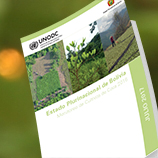 19 July 2017 - In 2016, coca bush cultivation increased 14 per cent in Bolivia compared to the previous year, according to the latest Coca Crop Monitoring Survey launched today in La Paz by UNODC and the Bolivian Government. In this period, the surface under cultivation increased from 20,200 hectares (ha) to 23,100 ha, following five years of continuous reduction (2011-2015).

According to the same survey, Yungas de La Paz, Trópico de Cochabamba and Norte de La Paz provinces, respectively, accounted for 68, 31 and 1 per cent of the areas under cultivation in the country. Through the use of satellite imaging and field monitoring, a surge of coca bush cultivation was revealed in these three main areas. Compared to 2015, the cultivation in the Yungas de La Paz and Trópico de Cochabamba regions grew from 14,000 to 15,700 ha and from 6,000 to 7,200 ha, respectively. In the Norte de La Paz provinces, the surface increased from 150 to 240 ha.

In 2016, the Survey detected a net increase of 2,900 ha of coca bush cultivation and the Government of Bolivia reported a 40 per cent reduction of eradication from 11,020 to 6,577 ha. 64 per cent of the eradication results were achieved in the Trópico de Cochabamba, 22 per cent in the Yungas de La Paz and the Norte de La Paz provinces, whereas 14 per cent in Santa Cruz and Beni departments.

These figures reflect the main findings of the latest Coca Crop Monitoring Survey in Bolivia, carried out in the framework of a UNODC Programme, which is financially supported by the European Union and Denmark.

According to the Government´s data, the amount of coca leaf traded in the two authorized markets - Villa Fátima and Sacaba - was around 22,000 tons in 2016, equivalent to 58 per cent of the estimated total production. 92 per cent of the legally traded coca leaf was marketed in Villa Fátima while the remaining 8 per cent took place in Sacaba. The average weighted price of coca leaf in these authorized markets decreased by 14 per cent, from $9.4 per kg in 2015 to $8.1 in 2016.

Same data shows that coca leaf and cocaine paste seizures decreased by 2 and 4 per cent, respectively, from 362 to 353 tons and from around 12.7 to 12.2 tons. Whereas, seizures of cocaine hydrochloride increased by 107 per cent, from around 8.6 to 17.7 tons.

Speaking to the press, Antonino De Leo, UNODC Representative in Bolivia, expressed concern over the change of trends in coca bush cultivation and eradication witnessed in the country. He also stressed that "the UNODC Coca Crop Monitoring Survey provides precious data, information and recommendations that will help the government to set in motion more effective strategies to tackle illicit coca cultivation in the country and the challenges posed by it to sustainable development."