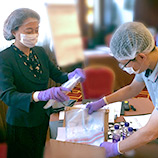 13 July 2017 - Tackling illicit financial flows and money laundering is a core element of UNODC's efforts in combatting drug trafficking and transnational organized crime in Afghanistan, and more widely in West and Central Asia.

Funded by the European Union, the four-day event was held in Beijing, China, where participants and discussed the importance of migrant remittances and fragile economies; the abuse of transfer services by transnational organized crime groups, terrorist networks and corrupt officials; sensitive investigation techniques; forensics strategies and evidence handling; and the challenges of prosecuting crimes across different legal systems. Mock investigations and the study of practical cases were also part of the training and helped participants increase their ability to effectively investigate the abuse of MVTS.

Also discussed was specific threats faced by individual countries. These include heroin trafficking, abuse of nonprofit organizations, financing of advanced improvised explosive device networks and terrorist financing flows from suspected donors in countries in the Middle East to fund the travel of foreign terrorist fighters in Syria and Iraq.

In the margins of the event, meetings were held, acknowledging participants' willingness to sign Memorandums of Understanding on information sharing.

Together with RPANC, the training course was organized by UNODC's Global Programme against Money Laundering (GPML), Proceeds of Crime and Financing of Terrorism in partnership with the People's Bank of China.