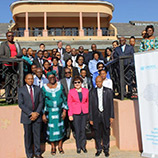 With a view to evaluating the progress made since last year, representatives from Angola, Botswana, Lesotho, Malawi, Mauritius, Namibia, Swaziland, Tanzania, Zambia, Zimbabwe, and the SADC Secretariat as well as UNODC's Regional Office for Southern Africa (ROSAF) came together recently, in Botswana.

Opening the meeting, Jorge C. Cardoso, SADC's Director of the Organ on Politics, Defence and Security Affairs, emphasized the relevance of the Regional Programme, while expressing regret that transnational organized crime is one of the persisting issues that haunt the region. It has the potential to destroy the region's future and its people, particularly the youth that are vulnerable and easily enticed with drugs by criminal groups, he cautioned.

In this regard, Mr. Cardoso underscored the need to boost the programme's implementation into other areas such as corruption, money laundering and other relevant crimes. "For our part, we will enhance the implementation of our regional protocols and strategies, inlcuding the SADC Protocol Against Corruption, the SADC Anti-Terrorism strategy and the Strategic Indicative Plan of the Organ," he said.

Also speaking at the meeting, Zhuldyz Akisheva, UNODC Regional Representative for Southern Africa, provided an overview of global developments that have taken place since the last progress meeting in 2015. These included new opportunities for inclusion of peace and security into the 2030 Agenda for Sustainable Development, priority issues agreed upon in the Outcome document adopted at the UN Special Session on the World Drug Problem, and decisions of the Commission on Crime Prevention and Criminal Justice, which set a broader dimension for cooperation under the Regional Programme.

The meeting concluded with several recommendations in the areas of countering illicit trafficking and organized crime; strengthening criminal justice and integrity; and improving drug abuse and HIV prevention, treatment and care.

The suggestions included enhanced cooperation on prison reform and combatting gender based violence at the regional and national levels, increased compliance with international rules, and possible interventions to address illicit trafficking and to strengthen border controls.