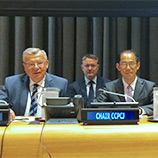 "At the same time, their actions exacerbate insecurity and perpetuate violence, as we have seen with the growing nexus of organized crime and terrorism," he said.

"But there is nothing inevitable or invincible about transnational organized crime. We must engage all of our institutions, if we hope to defeat the criminals and protect the defenceless," said Mr. Fedotov.

Crime can be defeated, he said. The wisdom of Judge Falcone was to focus on painstaking investigation, cooperation across borders, and unwavering and uncompromising integrity. Judge Falcone's insights, said Mr. Fedotov, also led to the adoption of the UN Convention against Transnational Organized Crime (known as the "Palermo Convention").

The Palermo Convention is one of the most effective ways of combatting crime due to its promotion of joint operations, information sharing, and mutual legal assistance to strengthen financial investigations, protect witnesses and seize illicit assets.

Mr. Fedotov said, "We need to work together to promote peaceful and inclusive societies, and foster the rule of law, in line with the Sustainable Development Goals and we need to invest in prevention and education, and involve young people and civil society."

Also speaking at the high-level event, Princess Bajrakitiyabha Mahidol of Thailand, UNODC Goodwill Ambassador on the Rule of Law in Southeast Asia, said: "We can all benefit from, and contribute to, the legacy of Judge Falcone by working together to promote the implementation of the United Nations Convention against Transnational Organized Crime."

"It is our responsibility to address negative forces like organized crime that challenge security and stability, to bring them to justice, to support victims, and to protect our communities and countries. We should continue on the road laid out by Judge Giovanni Falcone," she added.

The high level participants spoke during a high-level debate at the UN General Assembly commemorating the 25th Anniversary of the assassination of renowned Italian Judge, Giovanni Falcone.

Giovanni Falcone, was murdered on 23 May 1992 by a massive bomb placed on the motorway near Capaci, Sicily. The bomb also killed Falcone's magistrate wife Francesca Morvillo and several police officers travelling with him.

Other speakers included the President of the UN General Assembly, Peter Thomson; the Chair of the 26th session of the Commission on Crime Prevention and Criminal Justice (CCPCJ) and Ambassador and Permanent Representative of Japan to the UN (Vienna), Mitsuru Kitano; and President of 8th Conference of the Parties to the UN Convention on Transnational Organized Crime (UNTOC) and Ambassador and Permanent Representative of Costa Rica to the United Nations (Vienna), Pilar Saborio de Rocafort and the Italian Minister of Justice Andrea Orlando.