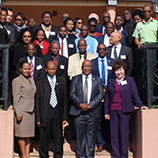 30 June 2017 - Illicit trafficking is among the most challenging forms of crime in Southern Africa. As an integral part of organised crime networks, illicit trafficking facilitates the spread of contraband and it generates considerable profits for individuals and groups involved.

With a view to strengthening information sharing and international cooperation, the 7th Asset Recovery Inter-Agency Network of Southern Africa (ARINSA) Annual General Meeting (AGM) was organized in partnership with UNODC, under the theme called "Development of national strategies for the management of seized assets".

Speaking at the opening ceremony, Eric Molale, Minister for Presidential Affairs, Governance and Public Administration of Botswana, said: "The expansion and administrative consolidation of ARINSA is a reflection of its members' commitment to increase their effectiveness in depriving criminals of their illegal proceeds from criminal activities."

Throughout the event, participants discussed their respective countries' asset recovery achievements in 2016. That included forfeiture of $23,000,000 worth of assets, investigation of 419 money laundering cases, seizure of 178 vehicles worth over $2,000,000 and $5,600,000 worth of gold and other assets such as cattle.

Participants emphasized the need for country assessments to determine the status of asset management legal frameworks. Equally important is to organize more judicial retreats in the region and that countries submit requests for technical assistance to enhance a multi-disciplinary approach in dealing with asset recovery cases.