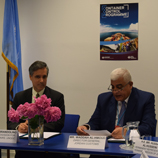 14 June 2017 - With a view to strengthening the implementation of the Container Control Programme (CCP), UNODC and Jordan recently signed a Memorandum of Understanding (MOU), reiterating their commitment to combat illicit trade.

Speaking at the signing ceremony, John Brandolino, UNODC's Director for the Division of Treaty Affairs, pointed to the strong relationship between the Office and Jordan, and acknowledged its regional expertise and efforts to share good practices.

Signing the MoU on behalf of Jordan, Waddah Al-Hmoud, Director-General of the Jordan Customs, described the CCP as a cornerstone of his country's national security strategy. "So far, the Programme has achieved great results in terms of seizing illicit drugs, counterfeit medicine, strategic and dual use goods, intellectual properties, cigarettes and wildlife crime items," he said, expressing Jordan's interest in expanding the CCP in order to cover broader topics.

Jordan has been a partner of the CCP since 2015, when the first Port Control Unit was established in the Port of Aqaba. In 2016, an Air Cargo Control Unit was founded at the Queen Alia International Airport.

As a joint programme between UNODC and the World Customs Organization (WCO), the CCP helps Member States strengthen their border control capacity and detect illicit goods in cargo containers.

Since its launch in 2004, over 60 inter-agency Port Control Units have been established in 38 Member States, resulting in the seizure of inter alia 187 tons of cocaine, 5 tons of heroin, 67 tons of cannabis, 1,516 tons of precursors (drugs and weapons), 606 cases of intellectual property rights (counterfeit) goods, 92 environmental crime cases and 30 cases of strategic and dual use goods.