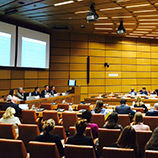 12 June 2017 - UNODC briefed 40 Member States in Vienna last week on its support for global policy efforts in the areas of human trafficking and migrant smuggling.

Opening the meeting, John Brandolino, UNODC Director of the Division for Treaty Affairs, spoke about the Office's involvement in several broader UN efforts.

Mr. Brandolino said: "While providing technical assistance to about 70 countries over the past year to implement relevant treaties and standards, our Vienna-based experts are also increasingly being asked to contribute normative expertise to broader international policy development."

Following his briefing, experts from the Human Trafficking and Migrant Smuggling Section provided detailed updates on the following processes:

According to Mr. Brandolino, UNODC's contributions to these processes "is critical to sharing the expertise and normative work done here in Vienna in addition to the best practices and lessons learned captured by our extensive technical assistance work on the ground."