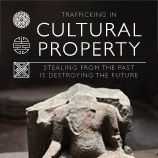 "The resolution adopted by the Security Council addresses the vital issue of trafficking in cultural property as a source of terrorism financing, and also sets out ways of protecting cultural heritage during armed conflict where it is most vulnerable. This undoubtedly strengthens the international community's ability to tackle this pressing issue," he said.

The Security Council adopted the resolution following a meeting on "Maintenance of international peace and security: destruction and trafficking of cultural heritage by terrorist groups and in situations of armed conflict."

In his briefing to the Council, Mr. Fedotov said: "The destruction of landmarks such as the Buddhas of Bamiyan, the Roman monuments in Palmyra, or shrines and mosques in Tikrit and Mosul are reprehensible attempts to erase history.

"This crime cannot be allowed to continue unabated," he said.

Mr. Fedotov further welcomed the resolution's emphasis on international cooperation in crime prevention and criminal justice responses to counter trafficking in cultural property, including through the UN Convention against Transnational Organized Crime (UNTOC), and its recognition of UNODC's "central role", together with INTERPOL and the UN Educational, Scientific and Cultural Organization (UNESCO), in supporting Member States to prevent and counter this crime and related offences that benefit organized criminal groups, terrorists or terrorist groups.

In his speech via video link, Mr. Fedotov highlighted the need to strengthen investigative capacities, border management, customs and anti-money laundering measures and international cooperation, as well as to bring in museums, dealers and the tourism sector in the fight against the destruction, looting, trafficking and sale of cultural heritage.

The meeting was held under the UK Presidency, on the initiative of France and Italy, and follows a number of other high level UN meetings addressing trafficking in cultural property.

Remarks of UNODC Executive Director at the Security Council meeting on "Maintenance of international peace and security: destruction and trafficking of cultural heritage by terrorist groups and in situations of armed conflict"