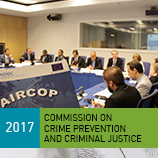 30 May 2017 -  Despite global efforts in fighting drug trafficking, transnational organized crime and acts of terrorism, such crimes continue to take place in the airports. In this context, the Airport Communication Project (AIRCOP) - a UNODC, World Customs Organization (WCO) and the International Police Organization (INTERPOL) initiative - aims to enhance the capacity of international airports in the detection and interdiction of illicit trafficking and suspicious passengers in origin, transit and destination countries.

With a view to showcasing the results of responses undertaken by the international community, a special event on AIRCOP was held last week in Vienna, at the 26th Session of the Commission on Crime Prevention and Criminal Justice.

Since its implementation, AIRCOP has expanded to 33 countries in Africa, Latin America, the Caribbean and the Middle East. From 2011 to date, 1,130 people have been arrested, and over 1,000 seizures made, including 3.1 tons of cocaine, 1.4 tons of cannabis, 2 tons of counterfeit medicine, 541 kg of ivory and US$ 6.5 million.

Also speaking, Pierre Lapaque, UNODC Regional Representative for West and Central Africa, stressed that illicit goods and high-risk passengers may transit several times before eventually reaching their final destination, and law enforcement agencies may receive key information in the process. As the culture of intelligence gathering and information sharing is not yet rooted in regular working networks, AIRCOP's collaborative approach and linking source are needed, he underlined.

Pointing to the successes, Mr. Lapaque said they are the outcomes of targeted capacity building, training, and mentoring programmes; joint operations; the provision of operational tools such as INTERPOL's I-24/7 and WCO's Customs Enforcement Network Communication Platform; and the commitment of national law enforcement officers.

Building on its success in Africa, Latin America and the Caribbean, AIRCOP has also been introduced in the Middle East and North Africa few months ago. Cherine Rahmy, UNODC Regional Representative for the Middle East and North Africa, indicated that such a step aimed at strengthening the capacity of selected airports to detect and intercept suspicious passengers, including foreign terrorist fighters, fraudulent document users and smuggled migrants, as well as to interdict trafficking of illicit goods.

AIRCOP, funded by the European Union, Japan, Canada, Norway, and the United States, contributes to strengthening Member States' efforts in countering criminal activities related to drug flows, organized crime and terrorism. It promotes an intelligence-led approach and information sharing at the national, regional and international levels.

Since its establishment in July 2012, the JAITF in Lomé, Togo has seized, both on passengers and in cargo, over 100 kg of cocaine, 14 kg of heroin, 145 kilos of khat, 600 kg of fraudulent medicines, over 2 tons of undeclared cigarettes, a dozen of fake and stolen passports, as well as ivory. The task force also conducts a routine risk analysis, and sends real-time intelligence to law enforcement agencies in final destination airports, while suspicious passengers are often already on board. This has resulted in the seizure of over 150 kilos of cocaine across Africa and Asia.

Similarly, in the Dominican Republic, the two established JAITFs have intercepted 320 kg of cocaine, 12 kg of heroin, 1 kg of cannabis, as well as 40 fraudulent documents and USD 850,000 in cash, resulting in 122 seizures and 105 arrests, including three persons with links to terrorism who were in transit in Punta Cana heading to Europe.