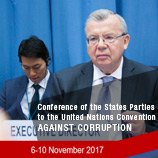 "I have seen how corruption hits the poor, the weak and the most vulnerable of all," the Secretary-General said in remarks delivered by Yury Fedotov, the Executive Director of the UN Office on Drugs and Crime ( UNODC), at opening of the Seventh Session of the Conference of the States Parties ( CoSP7) to the UN  Convention against Corruption(UNCAC), running through the end of the week in Vienna, Austria.

As such, Mr. Guterres called on leaders of all kinds - government, corporate, religious and cultural -to "lead by example and prove themselves trustworthy, to restore people's faith."

Delivering his own opening address, Mr. Fedotov said the biennial Conference is dedicated to combatting corruption and "strengthening the fight against crimes enabled by corruption and to protect lives."

He underscored the UNCAC, the UN treaty of 183 States Parties, as a "remarkable universal, legally binding instrument to fight corruption, promote accountability and support progress towards the Sustainable Development Goals ( SDGs)."

UNODC will launch an updated State of UNCAC Implementation Report, both demonstrating the progress made by the review mechanism, and presenting remaining challenges and existing good practices in anti-corruption.

"As guardian of the Convention and Secretariat to this Conference, UNODC continues to provide practical support here at headquarters and on the ground through our field presence," said Mr. Fedotov.

Moreover, UNODC is working with other international agencies to tackle corruption in wildlife crime, sports, and violent extremism. "This session will take important decisions on the Implementation Review Mechanism, as well as consider resolutions addressing a number of critical areas of anti-corruption work," said Mr. Fedotov.

Over 1,600 participants are attending COSP7, with about 45 side events and exhibitions will be held on the margins of the conference to promote discussion on anti-corruption activities.

Message of United Nations Secretary-General, António Guterres, to the Conference of State Parties to the United Nations Convention against Corruption