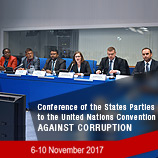 10 November 2017- This week's Conference of the States Parties to the United Nations Convention against Corruption (COSP) continues to be a platform for civil society organizations and Governments to share best practices in its review mechanism.

On the margins of the Conference (6-10 November), the UNODC Civil Society Team (CST) organized a side event, bringing together various stakeholders to discuss best practices in the UNCAC review. Organized in partnership with the UNCAC Coalition, the event showcased the results of successful cooperation between Mauritius and Bosnia and Herzegovina authorities and their civil society counterparts.

In her opening remarks, Petra Schirnhofer from the Austrian Development Agency (ADA) said: "The role of civil society in fighting corruption is more effective when their respective governments listen to them."

A representative from the Civil Society Network against Corruption in Mauritius underscored the importance of involving different groups of civil society, including religious leaders, in anti-corruption efforts. In response, the representative of the Mauritius Independent Commission against Corruption (ICAC) said that the Government and civil society organizations are integral partners in fighting corruption. Given the country's multicultural nature, it is critical to have structured and well-coordinated anti-corruption efforts across various societal groups, he emphasized.

Also participating, a representative of Transparency International Bosnia and Herzegovina talked about positive experiences gained from  the UNODC multi-stakeholder workshop, which took place in Sarajevo in September 2017. The event provided a learning opportunity for the representatives of the Bosnian authorities and led to a constructive dialogue with civil society during the second review cycle of the UNCAC implementation.

On that point, the representative of the Bosnian Agency for the Prevention of Corruption and the Coordination of the Fight against Corruption (APIK) underlined that "considering the complex environment in the country, it would have been impossible to implement our anti-corruption plans without civil society's participation."

More than 340 civil society representatives attended the COSP. 11 side events were organized by or with civil society.