UNODC Executive Director meets with the President of Uzbekistan to discuss cooperation against illicit drugs, transnational organized crime and terrorism 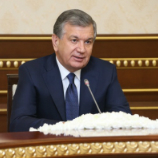 1 November 2017 - The Executive Director of the UN Office on Drugs and Crime (UNODC) Mr. Yury Fedotov met the President of the Republic of Uzbekistan H.E. Mr. Shavkat Mirziyoyev in Tashkent to discuss drug control, security, and regional cooperation.

The visit is taking place at an important time when Uzbekistan has recently adopted the Action Strategy for Development 2017-2021 and is undertaking significant reforms including in the area of security. During the meeting, President Mirziyoyev stressed that peace, prosperity and people's interests are at the heart of the government's reform agenda, which echoes with the pillars of the United Nations - Peace and Security, Development and Human Rights, also noting that the Action Strategy is fully consistent with the UN Sustainable Development Goals (SDGs).

The President noted, with deep satisfaction, the dynamically developing and strengthening of the mutually beneficial partnership of Uzbekistan with the UN, its structures and institutions. It was emphasized that Uzbekistan attaches great importance to deepening cooperation with UNODC in the sphere of combating illicit drug trafficking, transnational organized crime and international terrorism. He further noted that national and regional projects in these areas have been realized and are being implemented with the technical assistance of the Regional Office for Central Asia.

Mr. Fedotov highly appreciated the policy pursued by President Mirziyoyev on ensuring peace, stability and sustainable development in Central Asia, strengthening mutually beneficial cooperation with the countries of the region based on the principles of good-neighborliness, mutual understanding and consideration of common interests. The relevance and timeliness of the initiatives of the President of the Republic of Uzbekistan presented at the session of the UN General Assembly was emphasized.

The Executive Director, while expressing his appreciation to the President for the ongoing support provided by the Uzbek Government to the UNODC Regional Office for Central Asia, including UNODC's Programme for Central Asia 2015-2019 as well as the Regional Programme for Afghanistan and Neighbouring Countries, further assured that UNODC is fully committed to supporting the Action Strategy, especially related to the mandates of the organization on the prevention of drugs, crime, terrorism and corruption.

Furthermore, the UNODC Executive Director stressed that the high levels of opium poppy cultivation and illicit trafficking of opiates are creating multiple challenges for Afghanistan and the neighbouring countries, fueling instability, insurgency and terrorist groups, as well as related health crises.

Mr. Fedotov shared his view on the importance of the sub-regional cooperation on drug control, security and development and welcomed the initiative of the Uzbek Government to host the International Conference on Security and Sustainable Development in Central Asia under the auspices of the United Nations "Central Asia: One Past and a Common Future, Cooperation for Sustainable Development and Mutual Prosperity" to be held in Samarkand 10-11 November.

The roadmap will be developed in line with the national priorities identified in the Action Strategy of Uzbekistan and will identify concrete areas where UNODC could provide its technical assistance to Uzbekistan, particularly in light of the ongoing reforms of law enforcement, criminal justice, anti-corruption and healthcare systems of the country. An annual review mechanism of the joint Action Plan implementation process for cooperation with UNODC will be established and it will be aligned with the overall UN roadmap, UNDAF and the SDGs.

During his mission, Mr. Fedotov also met the Minister of Foreign Affairs of Uzbekistan, Mr. Abdulaziz Komilov and discussed the state and prospects of strengthening relations between Uzbekistan and UNODC in the context of expanding cooperation with the UN. The Minister highlighted that Uzbekistan has adopted and is implementing a programme for comprehensive measures to counter drug abuse and illicit trafficking for 2016-2020, which pays special attention to improving the regulatory framework in the field of regulating drug trafficking and providing narcological assistance, improving the material and technical base and human resources of law enforcement agencies as well as others.

Likewise, during the meeting between Mr. Sodiq Safoyev, the First Deputy Chairman of the Oliy Majlis (Senate) of Uzbekistan and the UNODC Director, the two sides expressed the significance of increasing engagement with the parliamentarians as well as legislators in addressing the reforms including human rights, health and the development agenda at the national, regional and global levels on issues related to drugs, crime and terrorism.

The Executive Director also met with the Minister of Interior of Uzbekistan, Mr. Pulat Bobojonov and the Director of the National Drug Control Centre under the Cabinet of Ministers of the Republic of Uzbekistan, Mr. Akhmed Mansurov where they discussed impending challenges and future technical cooperation on law enforcement.