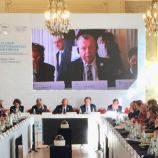 24 October 2017 - The Mediterranean is on the frontline of numerous urgent threats faced by the international community, UNODC Executive Director Yury Fedotov said today.

"This includes the targeting of migrants and refugees by organized criminal smugglers and human traffickers," he stated.

Mr. Fedotov was speaking at the high-level political segment of an Organization for Security and Cooperation in Europe (OSCE) conference on advancing security and cooperation in the Mediterranean, held in Palermo, Italy.

He said that the Mediterranean was a strategic priority for UNODC, which was working closely with the OSCE and other partners to respond to the unprecedented numbers of refugees and migrants flowing across countries in the region.

Mr. Fedotov said a new UNODC strategy, supported by Italy, would soon strengthen the transnational response to the smuggling of migrants and maritime crime in West, North, and East Africa. UNODC was also cooperating, he said, with the European Union naval operation known as "EUNAVFOR MED operation Sophia" to share information and build capacities to tackle migrant smuggling.

"And we support law enforcement in North Africa and the Middle East to conduct intelligence-based criminal investigations, and to manage borders and trade routes to combat all forms of transnational organized crime and trafficking," he added.

Mr. Fedotov said the foundation for UNODC's efforts was the landmark Palermo Convention against transnational organized crime and its protocols, the Convention against Corruption, the international instruments against terrorism and the UN standards and norms on crime prevention and criminal justice.

Other speakers at the OSCE event included, Minister of Foreign Affairs of Italy Angelino Alfano, OSCE Secretary General Thomas Greminger, and OSCE Chairperson-in-Office and Secretary-General for Foreign Affairs of Austria Michael Linhart, as well as many ministers and other high-level representatives from the OSCE and Mediterranean partner countries.

Remarks of UNODC Executive Director Yury Fedotov at the OSCE Mediterranean Conference event on "Links between drug trafficking, organized crime and terrorism in the Mediterranean region"