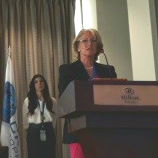 In the context of a joint Memorandum of Understanding (MoU) signed with Crime Stoppers International (CSI) in October 2016, UNODC recently participated at the organization's 38th Annual Conference held in Panama City, Panama.

At the opening ceremony, Gillian Murray, UNODC Deputy Director for the Division of Policy Analysis and Public Affairs, pointed out that "UNODC and CSI share many common concerns, including the breakdown of Rule of Law as well as weak institutions, which leads to increased vulnerability of at-risk populations in the areas of public health, social and economic development, and citizen security".

Also at the Head Table was Bryan Roach, the President and Ruud Smulders the Executive Chief of CSI, while the conference also brought together a number of national authorities such as José Gómez, Director General of the Panama Customs Authority, as well as members of the International Community and Civil Society.

The 38th CSI Annual Conference offered an opportunity for exchange of experiences and best practices on priority global issues, and particularly those affecting the Americas. Top international experts participated in thematic discussions on demanding topics such as illicit trade, counterfeit goods, intellectual property rights, trafficking in persons and other forms of organized crime.