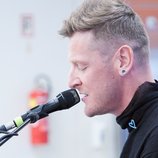 24 October 2017 - United Nations Office on Drugs and Crime (UNODC) celebrated UN Day on 24 October at the Vienna International Centre with a special event showcasing its work.

Through the Annual Report for 2016, which was presented at the event, participants learned what the Office does to combat drugs, organized crime, corruption, and terrorism.

"Today's event is a moment in time to recognise the incredible diversity of UNODC's activities on behalf of Member States to make the world a safer place," said UNODC Executive Director Yury Fedotov in a video message.

"The Annual Report shows how we are aligning our programmes to the efforts of Member States. UNODC is providing assistance on the ground to implement the Sustainable Development Goals, especially Goal 16 on peaceful and inclusive societies," he added.

The event was also an opportunity to officially renew the appointment of Ozark Henry as UNODC Goodwill Ambassador for Belgium. Since his appointment in 2015, he has used his talent and fame to raise awareness and to encourage his audience to join UNODC's Blue Heart Campaign against human trafficking through several outreach events, including concerts, Ciné-ONU film screenings, media interviews, television appearances and via his social media messages.

In recognition of his work and dedication, Jean-Luc Lemahieu, UNODC Director for Policy Analysis and Public Affairs, presented a certificate of appreciation.

At the event, Ozark Henry performed two of his songs and highlighted the issue of human trafficking.

The UN Day event included the exhibition Hear their Voices. Act to Protect, which showed testimonies of human trafficking victims.