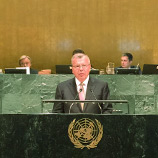 27 September 2017 - "Human trafficking is all around us, in all regions of the world," the UN Secretary-General António Guterres said today at a high-level meeting to assess the Global Plan of Action to Combat Trafficking in Persons.

UNODC Executive Director Yury Fedotov said: "We need governments to devote the needed resources to put laws into practice, to support victims, to train practitioners, and to enable inter-agency and cross-border cooperation."

He added that the Global Plan's appraisal would sharpen the world's response to an odious crime that exploited and victimized the vulnerable. UNODC was assisting countries against trafficking by working with its partners on prevention and the implementation of victim-centred criminal justice responses.

"Going forward, we need to do more to translate the very high level of awareness into more effective action, and to make better use of the established international framework to protect victims and ensure justice," Mr. Fedotov said.

New technologies are being abused to facilitate trafficking and this is stretching the capacities of countries to detect and investigate the crime. The UN Security Council had also underlined the links between armed groups and trafficking, and the threat to peace and security, he said.

Mr. Fedotov urged those present to support the UN Trust Fund for Victims of Trafficking in Persons, Especially Women and Children, established by the Global Plan of Action. The fund has provided support to 2,500 victims per year and funded 34 projects in 30 countries.

According to UNODC's Global Report on Trafficking in Persons around one third of human trafficking victims worldwide are children. Women and girls form 70 per cent of the total number of detected victims.

In 2010, the UN General Assembly passed resolution 64/293 containing the ground breaking Global Plan of Action to Combat Trafficking in Persons, which outlined the world's commitment to end the heinous crime of human trafficking.