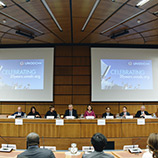 14 September 2017 - "I am proud of the support UNODC provides to countries to tackle the interlinked problems of drugs, organized crime, terrorism and corruption," UN Secretary-General António Guterres said in a video message played at a special event marking UNODC's anniversary.

Acknowledging UNODC's important work to safeguard agreed United Nations conventions, standards and norms, Mr. Guterres added: "We work together to strengthen our United Nations and help meet the challenges of our time."

UNODC Executive Director Yury Fedotov said, in a keynote speech delivered at the special event: "Terrorism, cybercrime, cryptocurrencies and the dark net are the unintended beneficiaries of globalization."

He said: "Transnational organized crime groups are exploiting vulnerabilities, crises and enforcement gaps wherever they find them, to expand their reach and diversify their activities."

Mr. Fedotov noted that globalization had delivered many positive benefits, but the international community was grappling with problems based on asymmetric globalization that had left people behind, undermined trust and created instability.

He warned of a growing nexus between transnational organized crime and terrorism that encouraged cultural property trafficking and generated funds for terrorists.

The event, Mr. Fedotov said, was an opportunity to reflect on the changes, acknowledge the challenges and renew the organization's commitment to strengthen future cooperation.

He said 20 years ago, there was no globally agreed definition of such terrible crimes as human trafficking, and corruption was not always considered a criminal offence.

Mr. Fedotov said: "Now conventions and instruments on crime and corruption are ratified by nearly every country in the world - a flexible framework enabling international cooperation, and encouraging the sharing of standards."

But, he acknowledged, the problems remain equally formidable, with the threats of drugs, crime, terrorism and corruption always evolving and emerging. "Much work remains to be done," he stressed.

In the health field, Mr. Fedotov noted UNODC was an active UNAIDS co-sponsor, and was heavily involved in strengthening HIV prevention, treatment and care for people who use drugs and for people in prison.

Closing his speech, the UNODC Chief said: "I would like to thank all my UNODC colleagues, in particular those on the frontlines in the field, for their hard work and dedication."

Other speakers at the event included: Pamela Rendi-Wagner, Austrian Minister of Health and Women's Affairs, Tanja Wehsely, Member of the Vienna City Council and the Vienna Provincial Parliament, Bente Angell-Hansen, Chair of the Commission on Narcotic Drugs, Mitsuru Kitano, Chair of the Commission on Crime Prevention and Criminal Justice, Marcel Peško, Director of the OSCE Conflict Prevention Centre, and Viroj Sumyai President of the International Narcotics Control Board.

Prior to the event participants viewed a photo exhibition of UNODC over 20 years and cut a ceremonial birthday cake provided by the City of Vienna.

UNODC was established in 1997 in Vienna when the UN International Drug Control Programme and the Crime Prevention and Criminal Justice Division were combined to create greater cooperation and coordination against drugs and crime.