We have a generational opportunity to help everyone live in dignity, says UNODC Chief 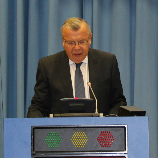 5 September 2017 - "Let us all work to end the cruelty of smuggling of migrants and human trafficking," UNODC Chief, Yury Fedotov, told participants at a UN General Assembly event yesterday.

"This is a generational opportunity to help every human being to live in dignity, and in safety and security. I also recognize the weight of responsibility placed on delegates to succeed in this goal," he said.

Mr. Fedotov was welcoming participants to the thematic session on migrant smuggling and human trafficking. It is the fifth of six such events designed to inform the development of the Global Compact on Safe, Orderly, and Regular Migration at a UN General Assembly conference in 2018.

The Global Compact will be the first negotiated agreement by governments, and prepared by the United Nations, to cover every aspect of international migration. The UN Secretary-General's Special Representative for International Migration, Louise Arbour, is also attending the two-day thematic session in Vienna.

In his speech, Mr. Fedotov told participants: "Our ultimate goal must be to enhance the development of the Global Compact for safe, orderly and regular migration."

The UN General Assembly's fifth informal thematic session on Smuggling of migrants, trafficking-in-persons, and contemporary forms of slavery, is being attended by 550 participants. This includes Member States, stakeholders from around 100 non-governmental organizations, private businesses and academia, as well as 80 UN representatives.

UNODC holds key mandates on human trafficking and migrant smuggling and is the guardian of the UN Convention against Transnational Organized Crime and its two protocols on these crimes.

Protocol against the Smuggling of Migrants by Land, Sea and Air, supplementing the United Nations Convention against Transnational Organized Crime