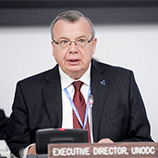 "When I refused to sell my body they sold me to another brothel". This is the heart rending testimony of a 13 year-old Nepalese girl named Skye trafficked by relatives to India. Skye's story ends better than most.

Together with her sister, Skye escaped the brothel, returned to school, and now works for the Nepalese organization who rescued her: the globally renowned Shakti Samuha. But for every survivor like Skye, thousands are suffering in silence, gagged by the threat of violence and blackmail.

People are labouring in farms and factories, coerced into the sex trade and tricked onto fishing boats. The range of coerced activities is equal to the huge number of places where victims are found.

Today, we all need to be vigilant for signs of the modern day slave trade: sexually exploited and brutalised women and girls; frightened children begging on street corners; and clusters of labourers squalidly living at their work place. This is the harsh evidence of a crime that haunts all our societies.

In the early 21st century, how did it come to this? Large number of victims are trapped in a hopeless circle of migrant smuggling and trafficking. The petrol fuelling these crimes is instability and insecurity.

Conflicts in Iraq and Syria, and economic crisis elsewhere, have produced a tide of desperate humanity sweeping through the Middle East, North Africa and across the lethal Mediterranean. These individuals are falling in and out of the hands of traffickers and smugglers as they seek sanctuary. Thousands are dying.

Last year, the New York Declaration delivered a compelling statement from the United Nations that refugees and migrants need protection and assistance. Nations agreed to return to New York in 2018 to adopt a Global Compact on migration. The Compact will be the first negotiated agreement by governments to cover every aspect of international migration.

Migration is an issue for our times, and there is a real need to go after root causes such as conflict, but we can all agree that refugees and migrants should not be treated like criminals.  This is why the Compact can take the lead, and nations can assist by adopting and implementing the UN Convention Against Transnational Organized Crime, and its relevant protocols on trafficking in persons and migrant smuggling.

We have the tools to disrupt organized crime networks through intelligence sharing, joint operations, financial investigations and coordination across local and regional borders. But it takes resources and an unyielding commitment.

Criminals are exploiting gaps in our international system that leave people defenceless and vulnerable to violence and enslavement. Our response must be founded on the rule of law; and we need to work together, share responsibility and acknowledge that we can and must do more to stop human suffering.

UNODC promotes a Trust Fund for trafficking victims that has helped thousands of victims become survivors around the world. Our unique Blue Heart Campaign supports the fund, and is a powerful advocacy tool to shout out the message that we all have to act if the criminals are to be defeated.

Such efforts are vital. In Mexico, UNODC's #AQUIESTOY campaign ("Here I am"), supported by the government, gives voice to victims and shows that trafficking is not happening on some far, distant shore, but all around us.

If adopted in 2018, the Global Compact has tremendous potential to enhance safe, orderly and regular migration and deal a concerted blow against the smugglers and traffickers. This is a generational opportunity to help every human being to live in dignity. Let's dare to seize the moment.