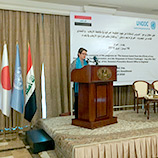 11 April 2018 - In recent years Iraq has been a target of several terrorist groups and militants who carried out numerous attacks. With the rise of terrorism threats in Iraq, UNODC has multiplied its efforts in providing legal, capacity building and technical assistance to the Government.

In this regard, UNODC's Terrorism Prevention Branch yesterday launched a two-year programme on "Lessons learned from Iraq's counter-terrorism efforts and response to future challenges: Iraq after ISIL/Da'esh", under the auspices of Haider Al-Abadi, Prime Minister of Iraq.

Delivering his remarks through a video message, UNODC Executive Director Yury Fedotov said that ending the scourge of terrorism and protecting people is a priority that concerns everyone. Noting that the event is a testament to the strong partnership between Iraq and UNODC, he underlined: "Our technical assistance programme has supported Iraq with national strategies and a draft counter-terrorism law. We have helped to build the capacity of hundreds of competent law enforcement officers and criminal justice officers."

"We at UNODC remain fully committed to advancing our constructive cooperation with Iraq to further enhance capacities and efforts to counter the threats of terrorism," Mr. Fedotov added.

Echoing that sentiment and speaking on behalf the Prime Minister, Nawfal Abu Al-Hassan, said: "Many lessons learnt in Iraq in response to the threat from ISIL [ISIL/Da'esh] will be shared with the international community through UNODC."

Speaking on behalf of the Special Representative of the Secretary-General for Iraq, Namik Heydarov, said: "The United Nations Assistance Mission for Iraq (UNAMI) and UNODC's partnership with the Government of Iraq comes in conformity with the new Iraqi vision in establishing safer communities in the liberated areas for Iraq and its people."

Cristina Albertin, UNODC Regional Representative for the Middle East and North Africa, pointed to the remaining challenges such as "a fertile ground for extremism, vulnerable population groups like children, and high number of victims awaiting justice, rehabilitation and redress".

"We need to work together to find lasting solutions to all of the inter-related threats and challenges," she continued, welcoming contributions made by the Government of Denmark and of Japan.

Also attending the event, Endo Akira, Deputy Head of Mission of Japan to Iraq, commended the increased cooperation between the Government of Japan and UNODC, noting that his country has provided $2 million for the counter-terrorism programme (2018-2019).

During the event, the plans of opening a new UNODC office in Baghdad was announced as participants engaged in discussions around its role and prospects. Further, Iraqi representatives shared their national experiences, lessons learned and best practices in the fight against ISIL/Da'esh in Iraq.

The event, which took place at the Prime Minister's Guesthouse, brought together Iraqi Ministers and high-level senior officials as well as Heads of Missions and representatives of diplomatic missions and international organizations.