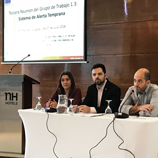 7 August 2018 - The seizure of a multi-kilogram shipment of "ecstasy" (MDMA) in powder form earlier this year was unusual for Uruguay, but it did not yet ring alarm bells for the Early Warning System in Montevideo.

However, "When reports of young people suffering from an "ecstasy" overdose kept coming in from hospitals, we got really worried," said Héctor Suarez, who coordinates the system in Uruguay.

Young people who are familiar with "ecstasy" sold as pills are at risk of overdosing crystalline and potentially higher potency MDMA, which has come into the country in comparatively large quantities in 2018.

With a view to countering this challenge in Latin America and the Caribbean, a drug policy workshop was recently held in Montevideo, Uruguay. Speaking at the event organized by COPOLAD (Cooperation Programme on Drugs Policies), Mr. Suarez said: "It was at this point when we decided to go public to make sure this information reaches all relevant people and institutions, and helps to minimize the risk of further overdoses."

Speaking on behalf of the Office, Martin Raithelhuber said: "UNODC supports laboratories in Latin America and the Caribbean to ensure health-relevant information is available for early warning on drugs. This directly contributes to reducing health risks."

In November 2018, UNODC will conduct a forensic capacity building workshop for 13 countries in Latin America and the Caribbean, which will receive modern handheld electronic field testing devices to detect new psychoactive substances posing a threat for public health. The data generated with the help of these devices would be useful for law enforcement, border control and laboratories, as well as for national early warning systems, which will receive faster and more detailed information about changes in the drug market.