UNODC welcomes adoption of the Global Compact for Safe, Orderly and Regular Migration 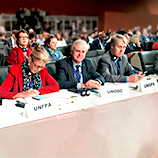 14 December 2018 - The United Nations Office on Drugs and Crime (UNODC) welcomed the historic agreement of Member States to adopt the Global Compact for Safe, Orderly and Regular Migration during the Intergovernmental Conference which took place in Marrakech from 10 to 11 December 2018.

The Conference, chaired by Ms. Louise Arbour, UN Special Representative of the Secretary-General for International Migration, marked the conclusion of intergovernmental negotiations launched by the "New York Declaration for Refugees and Migrants". The General Assembly will consider the outcome of the Conference next week, marking the final step in formal adoption.

In Marrakech, Jean-Luc Lemahieu, Director of UNODC's Division for Policy Analysis and Public Affairs, welcomed the discussions and stressed that UNODC looks ahead to practical and progressive action on the Global Compact. He noted that, as guardian of the United Nations Convention against Transnational Organized Crime and its protocols against the Trafficking and Smuggling of Migrants, UNODC is well-placed to assist states in implementing objectives 9 and 10 of the Compact's 23 goals.

Objective 9 focuses on strengthening the transnational response to smuggling of migrants, and objective 10 on preventing, combating and eradicating trafficking in persons in the context of international migration. Both reinforce the existing international legal framework, referencing the UN Smuggling and Trafficking Protocols as relevant, actionable instruments.

UNODC also welcomed the increasing attention to the intersections between sexual violence in conflict and human trafficking, and noted the recent award of the Nobel Peace Prize to Nadia Murad, UNODC Goodwill Ambassador for the Dignity of Survivors of Human Trafficking as a well-deserved recognition of Ms. Murad's bravery in the fight against such practices.

As a member of the Executive Committee of the UN Migration Network that has been established to assist states' implementation of the objectives contained in the Compact, UNODC emphasized that it stands ready to engage with all actors to take up this historic opportunity.