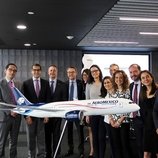 In his speech, Mr. De Leo said: "Each year, the possibility of victims being transported by air increases. The air transportation sector plays a crucial role in detecting the signs of human trafficking, referring the cases to the authorities, and disseminating information to the public."

"Aeromexico joining #AQUIESTOY is a milestone. Through its worldwide network, the message 'human trafficking exists, closer than you think' will reach thousands of people," Mr. De Leo added.

The partnership between UNODC and Aeromexico is a result of the Annual General Meeting of IATA that took place in Cancun, Mexico last year. At the meeting, parties discussed how the airline industry can help detect and prevent human trafficking.

Speaking on behalf of Aeromexico, Mr. Conesa reiterated the company's commitment to the protection of human rights to build a better society. Aeromexico is one of Latin America's top three carriers, and the airline operated more than 600 daily flights to the Americas and Europe. Further, it is the only Latin American airline with direct flights to Asia.

#AQUIESTOY was launched by UNODC and the Government of Mexico as a national campaign in July 2017. It aims to inform the public on human trafficking, to give a voice to victims, and to promote the national hot line 01800 5533 000. The campaign shows people's outrage against human trafficking and encourages the public to think about their responsibility as consumers of goods and services.