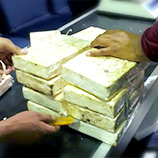 26 January 2017 - Airport law enforcement services in some thirty countries across Africa, Latin America and the Caribbean, as well as the Middle East, intercepted 900 kilograms (kg) of cocaine during Operation COCAIR VI in December. The Operation is part of the Project AIRCOP, jointly implemented by UNODC, World Customs Organization (WCO) and the International Police Organization (INTERPOL).

Cocaine topped the list in terms of numbers of seizures and quantities intercepted while drugs such as heroin, tobacco, methamphetamine, cannabis, khat, medicines, and lysergic acid diethylamide (LSD), were among items seized by law enforcement officials.

Among the results were three interceptions totaling over USD 700,000. The outcome has shown that the movement of smuggled currencies observed during the previous COCAIR operations is still prevalent. The operation has led to the detainment of thirty-two people and incrimination of two companies.

The main objective of the operation was to intercept illicit consignments of cocaine by air from South America bound for Europe, directly or via transit zones in Africa. More generally, it aimed at detecting illicit substances or contraband that might be transported by air.

The Project AIRCOP aims at strengthening controls in international airports in Africa, Latin America and the Caribbean through the establishment of Joint Airport Interdiction Task Forces (JAITFs), while bringing together the national stakeholders in law enforcement and the fight against fraud.

As part of the Project, JAITFs and other units formed an enforcement network covering 38 airports in 35 countries.  The network has enabled the officers to exchange information and record their seizures via a secure communication system, CENcomm.

The officers also have access to the INTERPOL data bases (I-24/7) to search the criminal records of those detained, and to verify the authenticity of travel documents in circulation.

In addition to JAITFs, participating in the Operation were WCO Regional Intelligence Liaison Offices for West Africa, Western Europe, Central Africa, Asia, and the Caribbean.

Funded by the European Union, Operation COCAIR VI helped consolidate cooperation between operational services in participating countries.  In addition, the rapprochement with the CRIMJUST project opens up new opportunities for further investigations by the national investigation services on currency seizures to determine their origin or purpose.