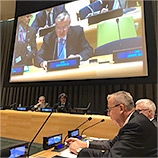 29 June 2018 - Heads of counter-terrorism agencies around the world gathered at United Nations Headquarters in New York on 28 and 29 June to strengthen efforts to tackle the scourge of terrorism.

Speaking at the high-level event, UNODC Executive Director Yury Fedotov said: "we need to do more to support all countries to undertake rule of law-based investigations and prosecutions, and ensure that national counter-terrorism measures are in line with international human rights norms and standards." He also conveyed UNODC's full support to the Global Counter-Terrorism Coordination Compact.

The Session focused on the engagement with civil society, prioritization of the capacity building and technical assistance to Member States, and the streamlining of the roles and responsibilities of United Nations entities dealing with counter-terrorism.

"Concerted action and cooperation between Member States is needed to better mitigate risks. This includes improving mechanisms for information sharing, as well as coordination and collaboration between criminal justice and border security authorities," the UNODC Chief underlined.

On the sidelines of the Conference, UNODC organized an event on "Countering the Phenomenon of Foreign Terrorist Fighters: Combined Efforts of Police and Justice". The panel brought together representatives of Member States and international organizations, focusing on administrative, legal and operational challenges related to the phenomenon.