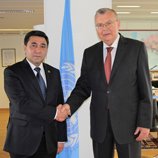 21 June 2018 - UNODC and the Prosecutor General's Office of Uzbekistan signed a Memorandum of Understanding (MoU), reiterating their commitment to further enhance cooperation in combatting transnational organized crime such as corruption, drug trafficking and others.

Speaking at the signing ceremony, UNODC Executive Director Yury Fedotov welcomed the socio-political and economic reforms in Uzbekistan and their very dynamic nature, stressing that the MoU will further support the efforts of the country in its important path of reform.

Otabek Murodov, Prosecutor General of Uzbekistan, reaffirmed the Government's continued commitment to fight crime in all its forms with the ultimate goal to ensure human rights, public order and security, with a strong emphasis on crime prevention.

The document is a direct outcome of the Plan of Practical Measures ("Road Map") on Further Development of Cooperation of Uzbekistan with UNODC in 2017-2019 on countering drug trafficking, transnational organized crime and terrorism that was signed in December 2017.

Building on the UNODC Programme for Central Asia (2015-2019) the MoU creates a cooperation framework between the Prosecutor General's Office and UNODC to combat transnational organized crime, drug trafficking, human trafficking, cybercrime and corruption through training prosecutors, as well as providing expert advice and technical support.

In particular, the agreement will further strengthen the institutional capacity of the Prosecutor General's Office to prevent, detect, investigate and prosecute crime. It will also contribute to the implementation of Goal 16 of the 2030 Agenda for Sustainable Development aiming to promote peaceful and inclusive societies for sustainable development, provide access to justice for all and build effective, accountable and inclusive institutions at all levels.

The parties highlighted that the MoU is an evidence of intention to open a new page of cooperation and agreed to elaborate an operational work plan on its implementation.