Helping the authorities in Mali go after the terrorists' money 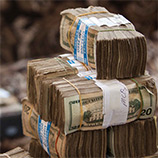 20 March 2018 - Mali is facing a unique combination of threats associated with various kinds of illicit trafficking and terrorism. Disrupting the flow of funding to terrorist groups through targeted financial sanctions is one way to reduce threats in the country, which will also benefit the region.

To help law enforcement agencies better understand these threats and be able to work more effectively to reduce them, UNODC has developed a training course on advance financial disruption techniques. It also looks at how countries can better use Security Council sanctions on terrorist financing as set out in resolution 1267/1988 as part of a wider financial disruption plan.

This training course was delivered in Mali in February by UNODC's Global Programme against Money Laundering (GPML) office in Dakar, Senegal, with support from GPML's Vienna HQ team, with 15 participants from different law enforcement agencies.

Financial disruption techniques can be used in addition to traditional methods such as prosecution, and allow Member States to reduce threats posed by terrorist networks by targeting their ability to raise, move, use and store money.

The participants learnt how to prepare a designation file for an individual suspected of terrorist financing. A designation file allows the UN Security Council to assess if the individual or entity is suitable for listing for sanctions in accordance with resolution 1267/1988.

"This programme helped us to identify how to reduce threats, including by using information from intelligence services," said one of the participants. "It also became clear that working with multiple agencies helps us to process operational information.

"This programme is a new and effective alternative to traditional methods of countering the financing of terrorism - it works because we take the early initiative, plan and put in place our disruption activities," the participant explained.

The Counter-Financing of Terrorism experts from Mali, having taken this introductory course will now be ready for a more advanced course in the future.

UNODC plans to deliver similar training courses to officials in Somalia, Afghanistan, the Middle East and North Africa region and Kazakhstan in the next six months.  The course, the only one available on this topic, was jointly created by the UNSCR 1267/1988 Monitoring Team, UNODC's GPML, and Terrorism Prevention Branch (TPB), along with the UN Office of Counter-Terrorism, the UN Counter Terrorism Committee Executive Directorate (CTED) and INTERPOL.

The development and delivery of the training has been supported by Canada, Japan, Norway, Russia and the United States amongst others as well as our partners in the UN system.