UNODC co-hosts world premiere of 'The Forgiven', spotlights need for reformation and social rehabilitation of prisoners 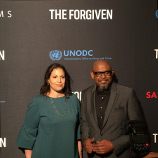 8 March 2018 - Lights, Camera, Action! Hollywood, California was the backdrop for a prestigious red-carpet premiere of the movie 'The Forgiven', a searing drama based on true events.

Co-hosted by UNODC, the movie premiered last night in Los Angeles, with distinguished attendees from the arts and media community.

Starring Academy Award winner Forest Whitaker and Eric Bana, the tense thriller recounts when Archbishop Desmond Tutu, as head of South Africa's Truth and Reconciliation Commission, was summoned to a maximum-security prison by a notorious murderer seeking clemency. Inside the brutal prison walls, Archbishop Tutu is drawn into a dangerous, life-changing battle with the cunning criminal in this captivating film from Oscar nominated director Roland Joffé.

Speaking about the movie, Simone Monasebian, head of UNODC's NY Office said: "Art is a powerful advocacy tool to raise awareness and we have always used it to complement our work. We hope this beautifully rendered bravely acted film will move people to think about prisons and prisoners in a new way."

Ms. Monasebian thanked the cast and crew for making this important film about Archbishop Tutu, noting that he taught all a great deal about the power of redemption, mercy and forgiveness.

Archbishop Tutu has described the film as "a tribute to the remarkable and healing power of forgiveness and the outstanding compassion and courage of those who offered love and forgiveness as an antidote to hate and inhumanity".

While the film focuses on the intrepid members of South Africa's Truth and Reconciliation Commission, the story is a universal one. It is estimated that more than 10 million people worldwide are held in penal institutions each year with an average imprisonment rate of 144 prisoners per 100,000 of the world population.

Within the United Nations system, UNODC is ideally placed to assist Member States in addressing the prison crisis by supporting human rights-compliant penal reform initiatives, as the guardian of the United Nations Standard Minimum Rules for the Treatment of Prisoners (the Nelson Mandela Rules).