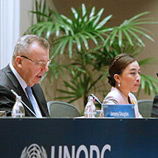 5 March 2018 - The United Nations Office on Drugs and Crime (UNODC), Government of Thailand and Thailand Institute of Justice (TIJ) have today hosted a High Level Conference on Sustainable Development, Crime Prevention and Safe Societies at the United Nations Conference Centre in Bangkok.

The Conference was opened by UNODC Executive Director, Yury Fedotov, and UNODC Goodwill Ambassador for the Rule of Law in Southeast Asia, Her Royal Highness Princess Bajrakitiyabha Mahidol. The importance of Her Royal Highness being a Goodwill Ambassador for the region was highlighted by Mr. Fedotov, "as a lawyer and a practicing prosecutor, she is a passionate advocate of the rule of law and improving people's lives in Thailand and throughout Southeast Asia."

Her Royal Highness outlined the significance of the Conference as she set the stage for discussions, "It is unfortunately too often the case that those concerned with justice, security, governance, and development work in isolation from one another. At the same time, justice and law enforcement authorities and institutions have traditionally not been engaged in social and economic development agendas. Events like this that bring these groups together to consider and discuss the relationship of the rule of law and sustainable development show that times are changing."

The Conference addressed the necessity of a broad inclusive engagement to achieve the Sustainable Development Goals (SDGs), and the importance of reflecting on challenges facing Southeast Asia that require a criminal justice or public security response, including different transnational crime challenges, drug production and trafficking, and corruption. In addition, achieving the SDGs will require a focus on early identification of issues and prevention of crime.

Importantly, the Conference is the first in Southeast Asia related to the SDGs that brings together national, regional and international experts and partners with a relationship to crime prevention and ensuring safe societies, with a particular focus on those that have not traditionally thought of their work as contributing to development.  One of the outcomes of the Conference is the acknowledgement that crime prevention and justice practices need to be shared in the Southeast Asian region, and that governments will need justice and public security agencies included in their planning for the SDGs.

"High-level events such as these serve an important purpose: they increase awareness that criminal justice and public security processes are not separate from development, and in fact they are closely connected to the conditions necessary for sustainable development", stated Mr. Fedotov.

Among the 250 delegates attending the Conference are high level officials and key proponents of the 2030 Agenda and rule of law in the region; the Deputy Prime Minister and Justice Minister of Thailand, the Attorney General of Thailand, the Secretary General of the ASEAN Inter-Parliamentary Assembly, the Minister and Chairman of the Anti-Corruption Commission of Myanmar, the Senior Advisor to the Minister of National Development Planning of Indonesia, the Vice Minister of Justice of Japan, the President of the Korean Institute of Criminology, several ASEAN and international partner ambassadors, senior diplomats and delegations from across the ASEAN region, as well as leadership of UN agencies based in Bangkok and other Southeast Asian countries.