Event to mark 15th anniversary of the UN Convention against Corruption highlights links to peace and security, sustainable development 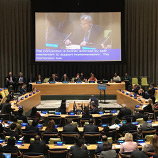 The high-level debate was opened by the President of the General Assembly, Miroslav Lajčák and United Nations Secretary-General António Guterres.

The UNODC Executive Director noted the achievements of the Convention, which has become "an integral part of the modern system of international law" with 184 States Parties.

"It is hard to believe that just fifteen years ago, there was no global instrument to criminalize corruption, to recover and return stolen proceeds. Now nearly every country in the world has corruption offences on their books," he said.

Mr. Fedotov further highlighted the importance of the Convention for achieving targets under the Sustainable Development Goals (SDGs).

"Tackling corruption, bribery and money laundering, as well as recovering stolen assets, are specific targets under SDG 16. Moreover, such action is clearly a prerequisite to sustaining foreign investment, innovation and economic growth, "he said. "But anti-corruption responses are also crucial to ensuring access to healthcare, water, education and other vital services; protecting forests, oceans and wildlife; and reducing inequalities."

Going forward, he urged governments to provide resources for effective implementation of the Convention, particularly to support developing countries, and underscored the need for reliable anti-corruption data to measure SDG progress.

"I very much hope this fifteenth anniversary will renew commitment to take the next needed steps in our collective fight against corruption. Let us take this opportunity to ensure that justice can be served," said the Executive Director.

Statement of the UNODC Executive Director, Yury Fedotov, at the High-level debate to mark the 15th anniversary of the adoption of the United Nations Convention against Corruption