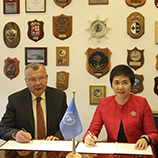 2 May 2018 - The Executive Director of the UN Office on Drugs and Crime (UNODC), Yury Fedotov, and the Secretary General of the International Civil Aviation Organization (ICAO), Fang Liu, signed a memorandum of understanding today to enhance the security of international air transport systems to counter transnational organized criminal networks and terrorist groups.

"The partnership between UNODC and ICAO can help to strengthen the capacities of law enforcement agencies working at airports in source, transit and destination countries to detect and intercept drugs, illicit goods and criminals," said Mr. Fedotov.

"This is vital as traffickers and high-risk passengers seek to exploit new transportation modes for criminal activities, and ever-increasing passenger numbers and growing connectivity present new challenges in countering the shipment of drugs and other illegal goods, whether on passengers, in luggage, through air cargo, by private aircraft or by parcel post and express."

The ICAO Secretary General, Dr. Liu, said: "Supporting the implementation of practices and procedures to safeguard aviation against acts of unlawful interference, in addition to misuse from illicit trafficking, security threats, and terrorism, is one of the main priorities to be achieved through this MoU. It's essential that we promote a culture of collective responsibility and more effective and collaborative responses to these types of threats, while facilitating travel clearances for low-risk passengers."

The aim of the memorandum is to develop a joint operational framework to allow greater coordination on programmes and activities, focusing on both passenger and cargo transport.

This includes work with ICAO through the UNODC-WCO Container Control Programme-Air (CCP-Air) initiative. By employing methodology developed for land and seaports, CCP-Air helps to prevent the misuse of the international air transport system by establishing inter-agency units at airports to identify high-risk shipments. CCP-Air is currently active in 10 countries.

The memorandum will also strengthen cooperation under the Airport Communication Project (AIRCOP) managed and implemented by UNODC, the International Criminal Police Organization (INTERPOL) and the World Customs Organization (WCO). AIRCOP works with countries to establish and build the capacities of Joint Airport Interdiction Task Forces. These task forces gather and share intelligence, including advanced passenger information and passenger name record data, and on that basis, profile, target and intercept criminal traffickers and high-risk passengers, including foreign terrorist fighters.

With 22 task forces currently operational and a dozen more to be established in 2018-2019, as well as having a large network of partner countries and institutions, AIRCOP has so far resulted in the seizure of 7 tons of cocaine, almost 2 tons of methamphetamine, more than 7 tons of illegal and counterfeit medicine and 1.5 tons of items related to wildlife trafficking. Seven victims of human trafficking and eight potential foreign terrorist fighters have also been identified.