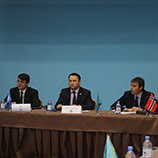 8 May 2018 - Depriving criminals of illicit profits and the methods to transmit them is critical in combating transnational organized crime. Regardless of the source, which can include drug trafficking, corruption, illicit financial flows, fraud and others, asset recovery is a key instrument, requiring a common effort by all affected countries.

With a view to facilitating the asset recovery process in West and Central Asia, UNODC's Regional Programme for Afghanistan and Neighbouring Countries recently organized a meeting to discuss the establishment of such a tool in the region. The event took place in Astana, Kazakhstan in partnership with the Academy of Law Enforcement Agencies under the General Prosecutor's Office of Kazakhstan.

"This money, either obtained illegally or with an illegal purpose, threatens the integrity of markets, distorts resource allocation, destroys trust in Government institutions and undermines the rule of law," Mr. Milsom added.

During the workshop, participants discussed a number of topics, including the establishment of an asset recovery network in West and Central Asia, and its membership, structure and functioning. Questions around "what an informal network is and how to use it" were raised during case presentations.

At the end of the workshop, participants decided to hold the next meeting in Turkmenistan in July 2018. The meeting will provide a platform to develop the statement of intent, to establish a Steering Committee to ensure effective administration and coordination, and to discuss the structure and functioning as well as organs, including the Presidency and Secretariat.