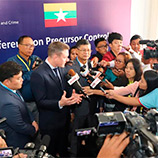 7 November 2018 - High-level delegations from East, South and Southeast Asia are in the capital of Myanmar, Nay Pyi Taw, to consider the deteriorating synthetic drug situation in the region and negotiate a new strategy to address the diversion and trafficking of precursor chemicals used in production.

"We are very pleased these discussions are underway", remarked Myanmar Vice Minister of Home Affairs Major General Aung Thu. He continued, "we put ourselves forward to co-host at the last negotiations on the Mekong Memorandum of Understanding (MOU) on Drug Control, and we reminded the region that precursors are required for synthetic drug production to continue to go up. While we are a significant source of illicit drugs, we are not a source of the chemicals."

Methamphetamine production and trafficking in the region has reached alarming levels in recent years, with seizures to-date in 2018 already exceeding records set in 2017. Supply from the Golden Triangle vastly exceeds market demand in the surrounding Mekong region and Southeast Asia, and it is a primary source of supply for Australia, Japan, Korea and New Zealand.

At the same time, powerful synthetic opioids like fentanyl are being produced, diverted and trafficked in and from the region to North America and recently Australia, where they are being mixed into the opiate and heroin markets to maximise profits. Significant illicit production of ketamine has also been found in the Golden Triangle, primarily for export to China and Thailand, and it is increasingly being trafficked across the region in mixed shipments with methamphetamine.

"The surge in synthetic drugs, particularly meth, that can be traced back to Shan in Myanmar is like nothing we have ever seen before, and it has required a matching surge in precursor chemicals. At this point the trade is worth billions of dollars to the larger transnational organized crime groups as they have consolidated production into safe havens and started trafficking to increasingly distant markets", warned UNODC Regional Representative Jeremy Douglas.

He added, "The levels of production we're now seeing would simply not be possible without a steady and rising supply of precursor chemicals of one type or another. But at the same time governments are reporting little if any seizure of chemicals and pharmaceuticals that can be used to make synthetics drugs, indicating traffickers source them easily and move them freely across borders. It is important that countries with large industries in the region are here, but they also need to participate in a coordinated regional strategy and programme. Thankfully we've had good engagement leading up to this week, and we expect it to continue as it is in everyone's interests to agree a way forward."

"We've been building towards this for nearly two years now, and the need to coordinate on a strategy and programme with UNODC has become obvious," explained National Narcotics Control Commission of China Deputy Secretary General Min Tianshi. "There is growing momentum to address cross-border precursor diversion and trafficking, and we see the talks here this week as a step forward," he said.

The Mekong Memorandum of Understanding (MOU) on Drug Control