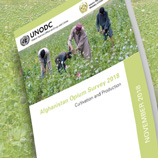 19 November - The total area under opium poppy cultivation in Afghanistan remains at very high levels despite a decrease by 20 per cent compared to 2017. The potential production of opium decreased by 29 per cent in 2018 compared to last year, while farm-gate prices hit an all-time low, according to the 2018 Afghanistan Opium Survey released today.

However, the decreases, in particular in the Northern and Western regions, were mainly attributed to the severe drought that has hit Afghanistan.

UNODC Executive Director Yury Fedotov said: "Despite the decreases, the overall area under opium poppy cultivation is the second highest ever recorded. This is a clear challenge to security and safety for the region and beyond. It is a threat to health in all countries where these drugs are being trafficked, as well as in Afghanistan itself. The international community needs to do more to support Afghanistan in pursuing balanced, health- and rights-centred responses to drug supply and demand."

The findings which were presented by the United Nations Office on Drugs and Crime (UNODC) and the Afghanistan Ministry of Counter-Narcotics in Kabul, show that the area under opium poppy cultivation in 2018 was 263,000 hectares compared to 328,000 hectares last year.

Opium yield also decreased, by around 11 percent, to around 24.4 kilogrammes per hectare, which may also be attributed to the drought.

The sharp drop in the farm-gate prices of dry opium, which in 2018 fell for the second consecutive year to an average of US$ 94 per kilogramme, which is the lowest level since 2004, may have also contributed to less cultivation of opium poppy.

Eradication of opium poppy has also dropped by 46 per cent in 2018 to 406 hectares in four provinces of the country, compared to 750 hectares in 14 provinces last year. During the 2018 eradication campaign, five lives were lost, and two persons were injured.

Despite the decrease in cultivation area, there is no single explanation to the continuing high levels of opium poppy cultivation. The study says that rule of law-related challenges, such as political instability, lack of government control and security, as well as corruption, have been found to be among the main drivers of illicit cultivation.

Opium poppy has become a crucial component of the Afghan economy that secures the livelihoods of many Afghans who engage in cultivation, work on poppy fields or partake in the illicit drug trade, the study finds. Opium also provides daily wage labour to many local and migrant workers hired by farmers.

The significant levels of opium poppy cultivation and illicit trafficking of opiates will probably further fuel instability, insurgency and increase funding to terrorist groups in Afghanistan. As another consequence, more high quality, low cost heroin will reach consumer markets across the world, with increased consumption and related harms as a likely consequence.

The study calls for more information about changes along opiate trafficking routes in transit and destination countries, to be able to determine possible consequences and policy considerations for Afghanistan and the international community of the continuing high opium production.