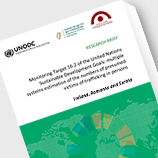 16 November 2018 - The United Nations Office on Drugs and Crime and the respective national authorities of Ireland, Romania and Serbia, in partnership with Walk Free Foundation, have carried out studies to estimate the number of victims of trafficking in persons in these three countries. The studies made use of the Multiple Systems Estimation (MSE) methodology and found that, in 2016, there were nearly 200 trafficking victims in Ireland, around 1,200 in Romania and 970 in Serbia.

'The publication of these three studies is encouraging,' says Angela Me, Chief of the UNODC Research and Trend Analysis Branch. 'For years, we've been searching for a sound methodology to uncover the real magnitude of trafficking and now, these studies show that such estimates are possible."

Three SDGs explicitly mention trafficking in persons, and one of them is SDG 16 promoting peaceful and inclusive societies, justice and strong institutions. Indicator 16.2.2 of SDG 16 calls for countries to report the number of victims per 100,000 population, broken down by sex, age and form of exploitation. This information can be gleaned from MSE studies when the underlying data is sufficiently detailed.

The studies enabled the calculation of the victimization rate per 100,000 population in the three countries. The overall, national rates for the three countries ranged from three to 12, although some important contextual information should be considered for a more accurate interpretation of these rates.

In Ireland, all the exploitation took place within the country, whereas for Romania and Serbia, most of the cases - some six in ten - were detected abroad, and the victims were subsequently repatriated. For this reason, considering only trafficking that took place on Romanian or Serbian territory, would lower the victimization rates for those countries significantly.

The breakdowns by sex, age and form of exploitation reveal significant differences in victimization patterns according to the victims' profiles. The same is true for stratification by citizenship, which is not called for by the SDG indicator, but is often included in MSE studies. For example, Ireland, Romania and Serbia all have far higher victimization rates for females, which is largely a reflection of the gendered nature of the trafficking crime, particularly in Europe. Moreover, the studies also indicate that child victims in these countries are less likely to be detected than adults.

This information can have a significant policy impact as it gives a clear indication of where national victim identification efforts might need to be stepped up. UNODC will continue to work with interested Member States to support Multiple Systems Estimation studies to enhance responses to trafficking in persons and to enable reporting on SDG 16.2.

UNODC Global Report on Trafficking in Persons and MSE studies