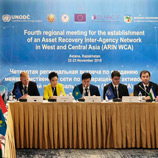 27 November 2018 - To enhance asset recovery in West and Central Asia by sharing experiences on domestic and international legislation as well as policy and procedures, UNODC and the General Prosecutors Office of Kazakhstan hosted the launch meeting of the regional Asset Recovery Inter-Agency Network West and Central Asia (ARIN-WCA) from 22 to 23 November in Astana, Kazakhstan.

Kazakhstan holds the inaugural Presidency of ARIN-WCA and hosted the network's launch event. In her opening remarks, Saule Ziyakhanova from the Ministry of Interior of Kazakhstan stressed the need for agencies to work jointly both domestically between asset recovery practitioners within Ministries of Justice and Interior and also internationally with other regional asset recovery networks, in order to deprive criminals of their illicit wealth.

In his Keynote Address, Baurzhan Kurmanov, Senior Assistant to the Prosecutor General of Kazakhstan and ARIN-WCA Presidency 2018 said "A large amount of illegally obtained assets are transferred to other jurisdictions outside this region. The main aim of ARIN-WCA is to strengthen operational contacts between our countries and establish relationships with ARIN contacts in jurisdictions across the world to locate and confiscate these criminally obtained assets".

Zohid Khatamov of the General Prosecutors Office of Uzbekistan confirmed Uzbekistan's commitment to support ARIN-WCA by providing a permanent Secretariat for the Network.

Jeremy Milsom, UNODC Senior Programme Coordinator stated that "UNODC has been working closely in the region to support the establishment of an ARIN for West and Central Asia. This launch meeting is the result of continued work between UNODC and asset recovery practitioners in the region to define the structure and functioning of this group. I look forward to seeing the positive results ARIN-WCA will bring".

The establishment of an asset recovery inter-agency network for West and Central Asia is based on the existing seven asset recovery networks in Asia Pacific, Europe, Latin America, East, West and Southern Africa and the Caribbean.

During their meeting, ARIN-WCA network members continued to build operational working relationships and also set strategic objectives for the network. Using an informal network to progress asset tracing investigations and enforce restraint and confiscation orders is still a new concept for many west and central Asia jurisdictions.

Participants also held discussions about how best to share information on asset forfeiture and confiscation cases with an aim to enhance asset recovery networking both within the region and between the region and the other seven regional Asset Recovery Inter-Agency Networks that exist across the globe.

Leading asset recovery specialists from the Camden Asset Recovery Network (CARIN), the Asset Recovery Inter-Agency Network Asia Pacific (ARIN-AP) and the Asset Recovery Inter-Agency Network Southern Africa (ARIN-SA) presented the challenges their jurisdictions faced in domestic and international asset tracing, freezing, seizure, management and confiscation prior to the establishment of their own ARINs. At a workshop, participants also discussed their own barriers to domestic and international asset recovery.