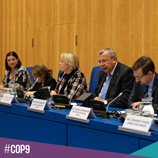 19 October 2018 - High-level representatives of the Inter-Agency Coordination Group against Trafficking in Persons (ICAT), which brings together UN agencies and other international organizations to prevent and combat this crime, met at a side-event at the ninth session of the Conference of the Parties to the UN Convention against Transnational Organized Crime. This is the latest in a series of ICAT briefings held in Vienna and New York.

The event featured a panel discussion during which participants underscored the need for increased cooperation and partnerships to tackle trafficking in persons, including protection and support for victims.

Though panellists noted that limited resources continue to limit the activities and potential of ICAT, they were also encouraged by the renewed wave of interest in the Group triggered by its first Principals Meeting in May 2018 in London.

"Our organizations have very diverse mandates, and yet we are all addressing this issue, whether in the context of criminal justice responses to human trafficking and migrant smuggling, comprehensive security, gender, migrants and refugees, children, conflict, or sustainable development," said Yury Fedotov, Executive Director of the United Nations Office on Drugs and Crime, adding that "we are all agreed on the primary importance of prevention, and protecting and assisting victims."

He also pointed out that the involvement of so many different organizations shows how widespread the crime of human trafficking is, "affecting every region and touching upon so many aspects of our daily lives."

Furthermore, Mr. Fedotov took the opportunity to commend Nadia Murad, UNODC Goodwill Ambassador for the Dignity of Survivors of Human Trafficking and recent Nobel Peace Prize laureate, for her bravery in the fight against human trafficking and sexual violence in conflict.

He also thanked the United Kingdom for providing seed funding for an ICAT Secretariat, which will facilitate enhanced coordination between the ICAT entities.

Panellists highlighted the need to increase and improve gender-responsiveness in preventing and combatting trafficking, as women and girls remain disproportionately affected. They also stressed the value of speaking with one, coordinated voice in providing support to States, including in implementing the Global Compact on Refugees and Global Compact on Safe, Orderly and Regular Migration.

The Inter-Agency Coordination Group against Trafficking in Persons (ICAT)