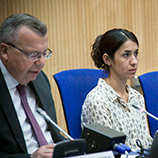 "The 2018 Nobel Peace Prize is truly a well-deserved honour for our UNODC Goodwill Ambassador Nadia Murad, who has been a brave and powerful voice for survivors of human trafficking and victims of sexual violence as a weapon of conflict," said Mr. Fedotov.

"Ms. Murad is the first-ever human trafficking survivor to serve as a United Nations Goodwill Ambassador. As terrible as it has been for her to relive the abuse and suffering she experienced at the hands of ISIL terrorists, she has told her story time and again, seeking justice for the Yazidi people and for victims everywhere.

"By doing so Ms. Murad reminds us that we must always listen to the people who have been most affected and harmed by the crimes we seek to stop, and that their testimonies must inform and strengthen our efforts to achieve justice.

"I look forward to continuing our work with and in support of Nadia, to take action against human trafficking and to protect the children, women and men who need us most."

Ms. Murad was first appointed UNODC Goodwill Ambassador for the Dignity of Survivors of Human Trafficking in September 2016, and she extended her appointment at the end of September. In 2014, at the age of 19, Murad, along with thousands of other women, was kidnapped in the village of Kocho in Sinjar, northern Iraq. While held hostage she was subjected to grave abuses at the hands of ISIL fighters. She escaped after three months' captivity.

Nadia Murad was awarded the Nobel Peace Prize for 2018 along with Dennis Mukwege for their efforts to end the use of sexual violence as a weapon of war and armed conflict.