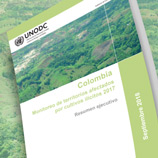 19 September 2018 - The area under coca cultivation in Colombia reached the highest ever recorded figure of 171,000 hectares (ha) in 2017, according to UNODC's Coca Cultivation Survey Report for Colombia, launched in Bogota today. This represents an increase of 25,000 hectares, or 17 per cent in 2017 compared to 2016.

According to the Report, produced by the Integrated System for Monitoring Illicit Crops (SIMCI) Project of UNODC, the departments of Antioquia, Putumayo, Norte de Santander and Cauca show the biggest increase in coca crop area of around 64 per cent.

Further findings of the Report:

• The department of Nariño and the municipality of Tumaco are still the most affected areas in the country, although in Tumaco the area under coca cultivation was down by 16 per cent.

• The greatest reduction in the area under coca cultivation was in the department of Guaviare, where cultivation decreased by 1,915 ha, compared to 2016.

• 33 per cent of the area under coca cultivation are located more than 10 kilometres away from populated areas and 34 per cent used to be a forest in 2014.

• 16 per cent of the coca cultivation areas are less than 10 kilometres away from a border. The borders with Venezuela and Ecuador are the most affected.

• The prices of fresh coca leaf, paste and cocaine hydrochloride fell by 28, 14 and 11 per cent, respectively.

It is estimated that the potential production of cocaine has a value of 2.7 billion dollars in the local market. There are concerns that this capital, derived from the drug economy, could undermine peacebuilding efforts, weaken the culture of lawfulness, strengthen armed groups and delegitimize democratic institutions through corruption and illicit financial flows.