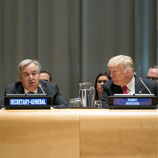 25 September - United Nations Secretary-General António Guterres underlined the need to act urgently on the global drug challenge at a High-Level Counter-Narcotics event organized by the United States on 24 September at UN Headquarters in New York. "You are focussing a global spotlight on the world drug problem, and we have never needed it more" he said to US President Donald Trump, who hosted the event.

The UN Secretary-General said this was more than just a policy issue, "It is personal." He spoke about losing someone close to him "at an unbearably young age". "All of us should know that this can knock on our door at any moment," he said, and called for immediate action.

The situation was "alarming," Mr. Guterres pointed out, as global production of opium and manufacture of cocaine has never been higher. Some 31 million people required treatment because of their drug use in recent years, and around 450,000 people die every year from overdoses or drug-related health issues.

"Non-medical use of tramadol in parts of Africa and the Middle East is threatening communities that are already fragile. Here in the United States, the opioid crisis is utterly heart-breaking - destroying lives and impacting communities," said the UN Chief.

To tackle this complex issue, the Secretary-General urged for strong action in two areas, which he had also focused on successfully as Prime Minster of Portugal in the early 2000s, when the country had some of Europe's highest drug abuse death rates and the highest rate of HIV amongst injecting drug users.

Firstly, he underscored the urgency to "crack down on drug trafficking and those who profit from human misery," specifically by denying them safe havens and better cross-border cooperation; improved intelligence-sharing and analysis across the entire drug supply chain; and targeting the links between drugs, corruption, arms, human trafficking and terrorist networks.

The second action area the UN Chief mentioned is making sure that those who need treatment get it. "Consumers are first and foremost patients and victims," he said.

Mr. Guterres said that the United Nations system, and he himself "stand ready to support governments in meeting the challenge of the world drug problem." He further emphasized that the UN stands behind the implementation of the UN Drug Control Conventions and the outcome document of the UN General Assembly Special Session (UNGASS) 2016.

The Secretary-General closed his speech by quoting the US President: "Failure is, indeed, not an option.", but he said, "Together we will succeed. We will never give up."

UNODC's Response to the Opioid Crisis

Drug use prevention, treatment and care