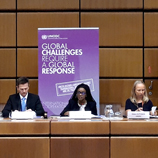 An effective response to this threat must likewise cross borders. The UN Convention against Transnational Organized Crime (UNTOC) is the main international instrument to counter this scourge, including by facilitating international cooperation between States.

To further the Convention's reach, UNODC convened representatives from nine Eastern African States from 4-6 September in Vienna, Austria, to support the ratification or accession process of States not yet party to the Convention and its Protocols. The meeting examined the provisions of these instruments, the ratification and accession requirements, and available UNODC tools.

" Organized crime is a global issue that drives instability and poses a threat to national security. Only by ratifying or acceding to the Convention and the Protocols thereto will we be able to effectively tackle organized criminal groups" said Ms. Loide Aryee, Chief of the UNODC Organized Crime Branch.

Organized crime, in particular trafficking in persons and migrants smuggling, poses a great threat in Eastern Africa. The workshop participants shared numerous examples of transnational organized crimes affecting their countries, together with the difficulties to investigate and prosecute them in the absence of the UN Convention against Transnational Organized Crime and its supplementing Protocols on Smuggling of Migrants, Trafficking in Persons and Illicit Manufacturing of Firearms.

Both States Parties and non-Parties to the instruments attended, which allowed for the exchange of information, positive experiences and challenges. Guided by UNODC experts during the three-day workshop, several officials expressed interest to become parties to the different instruments.

The workshop was organized in the framework of the Better Migration Management (BMM) Programme, currently implemented by UNODC and GIZ, with the support of UNODC Global Programmes against the Smuggling of Migrants and Trafficking in Persons.