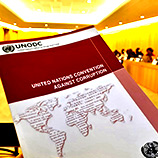 11 April 2019 -The United Nations Office on Drugs and Crime (UNODC), together with the UNCAC Coalition and with support of the Austrian Development Agency, trained civil society and government representatives from 14 African countries on implementing the United Nations Convention against Corruption (UNCAC) at a workshop from 8 to 11 April in Addis Ababa, Ethiopia.

Speaking at the opening ceremony, Commissioner of the Federal Ethics and Anti-Corruption Commission of host country Ethiopia, Ayeligne Mulualem explained that the Ethiopian Parliament adopted a new law this year which advances the self-regulation of Civil Society Organisations (CSOs) and recognizes the important role they play in monitoring corruption. "The fight against corruption will not be a success without strengthening national integrity systems where everyone plays a part", he said.

Roland Hauser, Austrian Ambassador to Ethiopia, echoed those comments, emphasizing the cross-cutting nature of corruption: "Corruption is found everywhere and addressing it should be a part of political culture of each country."

Amado Philip de Andrés, Regional Representative of UNODC in East Africa recalled the key objectives of the workshop and stated that East Africa is "the most active region in the world when it comes to civil society participation in the fight against corruption."

The workshop featured interactive training techniques, enabling participants to understand the Review Mechanism process for UNCAC pertaining to the Second Cycle (2016-2021), which focuses on preventative measures and asset recovery. The training sought to equip civil society participants and their governmental counterparts and raise the awareness and capabilities to work collaboratively in the review mechanism for UNCAC in their respective countries.

Respects were paid to Dimitri Vlassis, the longstanding Chief of UNODC Corruption and Economic Crime Branch, who sadly passed away this week. "We are mourning the passing of Dimitri Vlassis, the chief architect of the UN Convention against Corruption. It is thanks to him that we are discussing that landmark treaty", said Gillian Dell of the UNCAC Coalition.