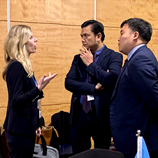 Synthetic drugs have rapidly become the most profitable illicit business in the region as organized crime groups have innovated their business model and engineered an expansion of the methamphetamine market, which is now valued at up to USD$ 61.4 billion annually according to the recent UNODC report Transnational Organized Crime in Southeast Asia: Evolution, Growth and Impact. At the same time, the growing diversity of synthetic drugs, including ketamine and synthetic opioids found across East and Southeast Asia are concerning for public security and health authorities. Countries are increasingly voicing concerns that the diversity of synthetic drugs emerging in the region is making it difficult for law enforcement and public health officials to implement effective responses.

Click here to learn more about UNODC's work on drugs and precursors in the region.