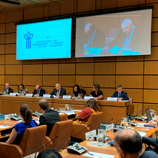 Vienna, 21 August 2019 - The United Nations Office on Drugs and Crime (UNODC) today commemorated the second International Day of Remembrance of and Tribute to the Victims of Terrorism. The event was co-sponsored by Afghanistan and Spain as the co-chairs of the recently formed Group of Friends of Victims of Terrorism.

Speaking at the event, UNODC Executive Director Yury Fedotov noted the challenges of victims and survivors of terrorism in securing justice.

He said that "governments must do more to advance victim-centred, rights-based criminal justice approaches as part of comprehensive counter-terrorism frameworks that address all aspects of victims' needs even as they hold perpetrators to account," emphasizing that "UNODC is working with the UN Office of Counter Terrorism and other partners to help countries implement the UN Global Counter-Terrorism Strategy."

Ms. Ebrahimkhel spoke about the importance of empowering victims of terrorism. She said that "enabling the victims to resume their normal lives and advocate for their needs, strengthens not only the provisions of the United Nations Global Counter-Terrorism Strategy, and relevant General Assembly and Security Council resolutions but the very core of the Charter of the United Nations as well."

Mr. Florensa Palau noted the role of victims as partners. He said "when we recognize the victims and survivors of terrorist attacks, listen to their thoughts, respect their rights, give them support and provide them with justice, we are honouring our common links, our sense of community, and reducing the harm caused by terrorists to citizens, families and to our societies."

Mr. Zandvliet stated that "there is room for improvement. There is no one-size-fits-all approach for victims of terrorism."

Mr. Ihler noted that "violent extremism is the violent denial of diversity" in talking about the need to include many different groups in the response to terrorism.  The event also observed a moment of silence to honour the victims of terrorism.

International Day of Remembrance and Tribute to the Victims of Terrorism