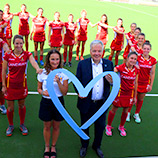 1 August 2019 - The United Nations Office on Drugs and Crime (UNODC) observed the World Day Against Trafficking in Persons on 30 July by organizing a wide range of events around the globe to highlight this heinous crime. UNODC offices worldwide engaged with local authorities and communities, guided by the 2019 World Day theme "Human Trafficking: Call your Government to Action."

At UNODC Headquarters in Vienna, a high-level event allowed government ministers, ambassadors and civil society representatives from around the world to share effective responses to counter human trafficking, joining either in person, via live video link or through video messages.

The UNODC Office in Brussels organized a meeting of Belgian Vice-Prime Minister and Minister of Foreign Affairs Didier Reynders with the national female grass hockey team Red Panthers, at which both Mr. Reynders and the Panthers expressed support for the Blue Heart Campaign against Human Trafficking. The cities of Brussels and Bruges illuminated their City Halls in Blue in support of the campaign.

UNODC Brussels also co-hosted the Lal Batti ("Red Light") Express, a play written and performed by woman and girls who are survivors of human trafficking for sexual exploitation from Mumbai, India. The play was also attended by the Belgian UNODC Goodwill Ambassador Ozark Henry.

The UNODC Regional Office for the Middle East and North Africa organized several events in the region. In Tunisia, an event was held with the National Anti-human trafficking Committee to raise awareness among government counterparts, civil society, and the general public about trafficking in persons and the government's actions to tackle this crime.

In Lebanon, UNODC partnered with the General Directorate of General Security and Caritas Lebanon to equip a new migrant workers' waiting room at the airport, providing information for migrant workers on the risks of human trafficking and emergency phone numbers in several languages.

In Egypt, UNODC supported an International Organization for Migration (IOM) community event to raise awareness on the issue of human trafficking. The event included a mental well-being session, a women's health session, a self-defence class, and awareness raising videos.

The UNODC Regional Office for Southern Africa, together with the Southern African Development Community (SADC) Secretariat and the Department of Justice and Constitutional Development of South Africa, held a three-day workshop to deploy the SADC Regional Trafficking in Persons Data Collection System. The system supports member states in collecting national data in a coordinated manner to understand the nature and extent of human trafficking and profile traffickers and victims, among other things.

In the framework of a Regional Conference on Trafficking in Persons, also attended by the UNODC Regional Office for Central America and the Caribbean, the Dominican Republic reiterated its support for the Blue Heart Campaign. The Dominican Minister of Foreign Affairs, Attorney General, and Presidents of the Supreme Court, Constitutional Court and Electoral Tribunal as well as the Ambassador of the United States were in attendance, and several buildings were illuminated in blue in Santo Domingo, in support of the Campaign.

Many more activities were carried out by UNODC offices around the world, information on many of these are available through the UNODC twitter moment of the 2019 World Day Against Trafficking in Persons.