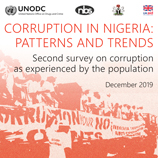 Abuja (Nigeria), 6 December 2019 - The National Bureau of Statistics of Nigeria in partnership with the United Nations Office on Drugs and Crime (UNODC) and with the support of the United Kingdom launched the report on the Second Survey on Corruption in Nigeria on 6 December in Abuja.

The survey assesses the likelihood of citizens being approached for the payment of bribes as well as the frequency of such requests and actual payments. It provides insights into citizens' attitudes towards corruption, their readiness to refuse requests for bribes and to report corruption incidents. It also provides data on bribery and nepotism in public sector recruitment as well as the phenomenon of vote buying.

The survey found that out of all Nigerian citizens who had at least one contact with a public official in the 12 months prior to the 2019 survey, 30 per cent paid a bribe to, or were asked to pay a bribe by, a public official. This means that, although still relatively high, the prevalence of bribery in Nigeria has undergone a statistically significant decrease since 2016, when it stood at 32.3 per cent.

Although a smaller percentage of Nigerians that had contact with public officials paid bribes, or were asked to pay bribes, in 2019 than in 2016, those who did pay bribes continued to do so quite frequently: in 2019, Nigerian bribe-payers paid an average of six bribes in the 12 months prior to the survey, or one bribe every two months, which is virtually the same as the average of 5.8 bribes paid per bribe-payer in 2016. As a result, it is estimated that some 117 million bribes are paid in Nigeria on a yearly basis.

The 2019 survey shows a notable increase since 2016, from 52 to 63 per cent, in the overall proportion of Nigerians who had at least one contact with a public official in the 12 months prior to the survey. This can be seen as a positive sign for the provision of public services in Nigeria. Healthcare professionals, namely doctors, nurses and midwifes, and public utility officials are the two types of public officials with whom the largest share (31 per cent each) of Nigerians had at least one contact in the 12 months prior to the 2019 survey. Police officers came a close third, with 30 per cent.

Statistician General Yemi Kale of the National Bureau of Statistic remarked that this second comprehensive survey on corruption in Nigeria provides the Government and the people of Nigeria an opportunity to assess not only the achievements that have been recorded in the process of tackling corruption, but also the framework for evaluating the impact of related progress.

Oliver Stolpe, UNODC Country Representative observed that while the prevalence of administrative, mostly low-value, bribery has decreased, the survey suggests that the Government's anti-corruption agenda is yet to affect this type of bribe seeking behaviour more fundamentally. Consequently, greater efforts might be needed to eradicate small scale corruption which continues to have a profound effect on the lives of Nigerians. He further expressed his hope that the survey will make an important contribution in the fight against corruption in terms of further enhancing its effectiveness and benefits for the people of Nigeria.

Report of the Second Survey on Corruption in Nigeria

UNODC data and analysis on corruption and victimization