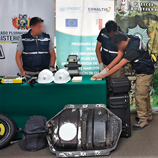 La Paz, 8 February, 2019 - The Plurinational State of Bolivia and the United Nations Office on Drugs and Crime (UNODC) inaugurated a Port Control Unit (PCU) in La Paz, which forms part of the Container Control Programme (CCP) and will help fight the illicit trafficking of drugs and other products. Bolivian officials were also provided with equipment that will be used mainly in customs units close to Chile to intercept contraband and controlled substances.

UNODC and the World Customs Organization (WCO) established the CCP to help governments create effective container controls by improving the capacities of national customs, police, and the authorities in charge of applying the relevant laws. The improved control of containers serves to prevent the trafficking of illicit drugs and facilitates legitimate trade, thus also increasing domestic revenues.

The personnel of the Bolivian Special Force to Fight Drug Trafficking (FELCN) and Bolivian Customs officials will be trained and equipped so that their joint work allows the identification of risk profiles of containers that may be used for illicit drug trafficking, contraband, counterfeit products, trafficking in firearms and ammunition, crimes against flora and wildlife, falsified medical products, undeclared assets and tax evasion, among others. All this is to be achieved with a minimum interruption of legitimate trade.

With the financial support of the European Union, Germany and the Bolivian Government, UNODC and the WCO will strengthen the capacities of the Bolivian officials that will make up the PCU and will provide them with the latest technology and equipment and access to global communications networks for the exchange of information and intelligence in real time.

The new equipment will initially be used in the customs post of Tambo Quemado to intercept contraband and controlled substances, such as cocaine, marijuana, synthetic drugs, precursors and others.

Due to its geographical position, Bolivia is a strategic territory for the passage of merchandise from Brazil, Argentina and Paraguay to the Pacific Ocean, as well as from Chile and Peru to ports of the Atlantic Ocean, whose destination is usually Europe or Asia. Although the country does not have a seaport, a large part of its import and export is carried out using maritime containers.

The Minister of the Interior, Carlos Romero, the Vice Minister of Social Defense and Controlled Substances, Felipe Cáceres, the General Commander of the Bolivian Police, General Rómulo Delgado, the Director of the Special Force to Fight Drug Trafficking (FELCN), Colonel Maximiliano Dávila, the President of the National Customs, Marlene Ardaya, the CCP Regional Coordinator for Latin America and the Caribbean, Bob Van Den Berghe, the Coordinator of the National Council for the Fight against Drugs Illicit Trafficking (CONALTID), Sabino Mendoza, the Ambassador of the European Union, León de la Torre, the Minister Counselor of the Embassy of the Federal Republic of Germany, Adrian Seufert, and the UNODC Representative in Bolivia, Thierry Rostan, inaugurated the PCU accompanied by representatives of the media.