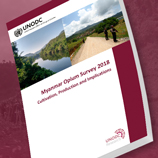 Reductions in cultivation have taken place in practically all regions, but have been most significant in South Shan with a decline of 17 per cent and Kachin State with a decline of 15 per cent, followed by East Shan and North Shan declining 8 per cent and 7 per cent.  With an average yield of 14 kilograms per hectare in 2018 total opium production dropped from 550 to 520 metric tons, equivalent to approximately 53 tons of heroin destined for the domestic and regional drug markets.

He added, "drug production has to be carefully and candidly assessed and discussed, and it requires continuing access to isolated areas to develop and gather data and information. At the same time, crime groups are using unstable and insecure parts of the country to do business, and without addressing lawlessness these areas will continue to be a safe-haven for those who profit from the drug trade."

The decline in opium cultivation occurs against the backdrop of a dramatically changing regional drug market. Opium and heroin have declined over recent years as countries across East and Southeast Asia have reported a strong shift toward synthetic drugs and especially methamphetamine.

Deputy Minister of Home Affairs General Aung Thu acknowledged that further effort will be needed to effectively address the production of opium, heroin and other drugs in Myanmar. He commented that "the Government of Myanmar is pleased to see further declines in opium cultivation, but we also agree that there is still much to do, and we will continue to support programmes that provide viable alternatives to opium. We will also work with our neighbours of the Mekong MOU, ASEAN and UNODC on shared strategies to address the production and cross-border trafficking of drugs and precursor chemicals in the region."

Miwa Kato, UNODC Director of Operations, emphasized the importance of sustainable alternative development initiatives and regional cooperation, noting "Myanmar has taken important steps to address opium cultivation, especially in South Shan where we are running a large alternative development programme together, and we recognise that maintaining support will be critical over the near and medium term. At the same time the regional dimension is undeniable, and solutions will have to involve surrounding countries and international partners, and we will support with our regional programme." She remarked further, "drug production and conflict are often connected, and we will be scaling-up our participation in UN efforts that support a sustainable peace."