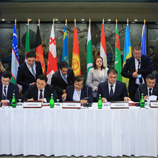 10 June 2019 - The Heads of Customs Authorities of Afghanistan, Georgia, Kazakhstan, Kyrgyzstan, Pakistan, Tajikistan, Turkmenistan, Ukraine and Uzbekistan committed to increasing customs cooperation by signing a Memorandum of Understanding on an Inter-Regional Network of Customs Authorities and Port Control Units (PCU) on 22 May.

The Inter-Regional Network operates within the framework of the Global Container Control Programme (CCP) which aims to prevent the cross-border movement of illicit goods and was developed jointly by the United Nations Office on Drugs and Crime (UNODC) and the World Customs Organization.

The Memorandum of Understanding was signed at the Sixth Annual Inter-Regional Meeting organized by UNODC and Uzbekistan. Murotjon Azimov, Head of the State Customs Committee of Uzbekistan, highlighted that "the CCP has become an effective mechanism of regional cooperation representing the platform for discussion and establishing networks in the field of countering illicit movement of smuggled goods, including illegal drugs, which remains a threat to regional and international security."

"Today's meeting marks a historic signing of a MoU by the Heads of Customs Administration from nine participating countries. It also launches a new phase of our cooperation towards combatting drug trafficking and other criminal activities along with facilitation of legitimate trade under Inter-Regional Network of Customs Authorities and Port Control Units within CCP," said Ashita Mittal, UNODC Regional Representative for Central Asia.

The existing inter-regional infrastructure created under the CCP in the participating countries is expected to become an organizational and communication platform for information sharing within the Network. The Network comprises of representatives of Customs Authorities of the Parties, CCP National Focal Points and members of Port Control Units.

The CCP Regional Segment for Central Asia is funded by the Government of Japan and the U.S. Department of State Bureau of International Narcotics and Law Enforcement Affairs (INL), and the Export Control and Related Border Security (EXBS) Programme.